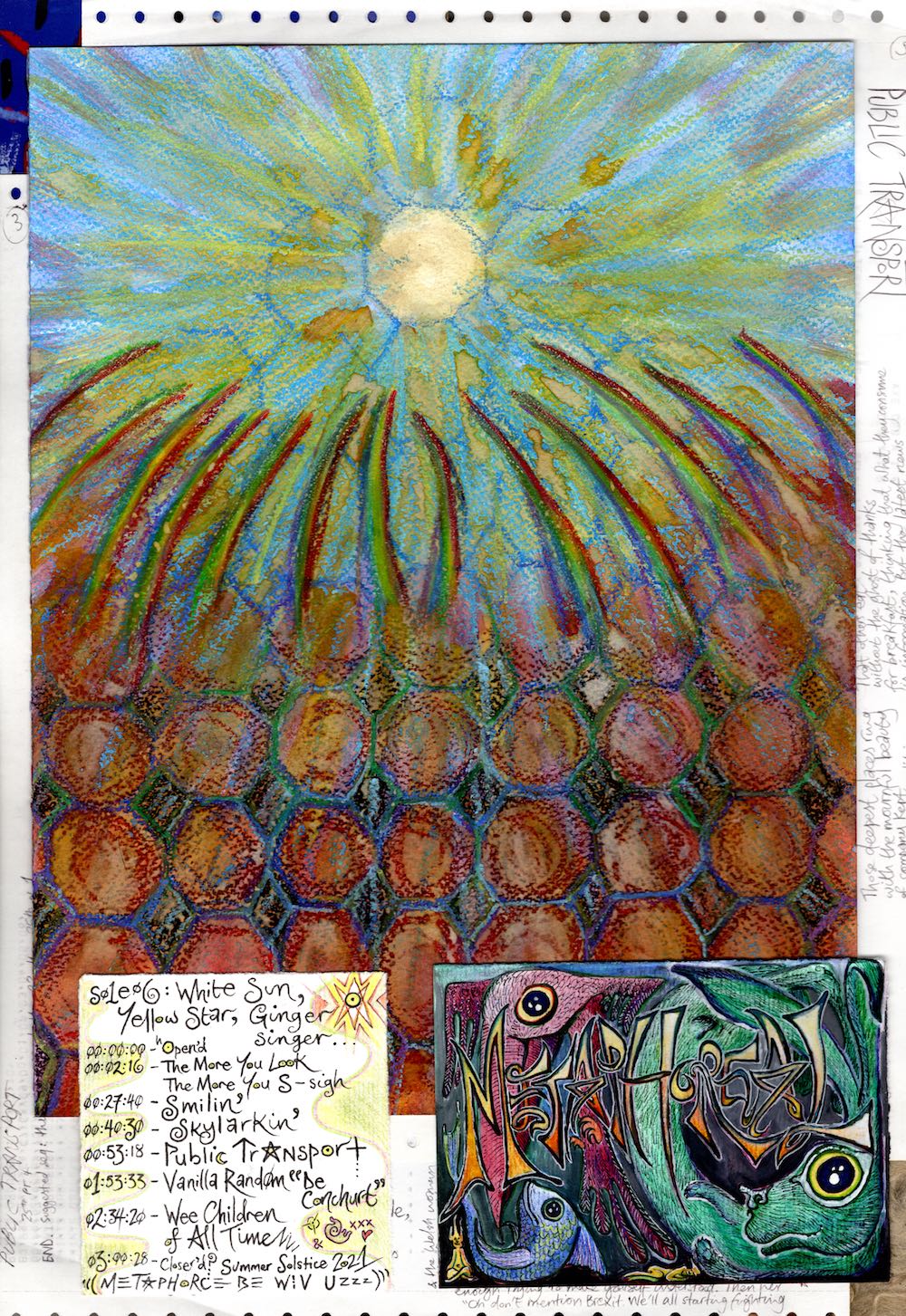 Episode 6 (of 8 planned for Season 1) of The Metaphoreal is the Summer Solstice edition: "White Sun, Yellow Star, Ginger singer." It is three hours long, breakable into three parts:

Opening with a hybrid field-recording-poem-song (in ye olde Ungléshan Neuroamantix tradition). It was summer solstice 2016 and I was wandering in the woods near Poitiers, in the west of France. I recorded spontaneous narration into my phone, and sat beside a stream in the vicinity of a stone monolith and played harmonica, which I later dubbed some poetry over. The narration leads up to and away from a moment alone in the middle of the woods. (Though of course: "You're never alone in the woods" and all that!)

Anyway, I found myself in an apologetic mood (the old sorry-to-be-human routine) and was wondering if there was anything I could do to make up for it, or what I should or could ask of the rest of us, perhaps. One of the main things I kept coming back to was limits - that perhaps this whole mess could be redeemed by being a story about us learning ours, and "wouldn't a nice way to enact or bring that about be to make some places be literally out of bounds for us, like the idea of mountaintops being sacred houses of the gods again, but maybe for different (or differently formulated) reasons?"

This feeling of mine goes beyond more moderate and practical limits-based ideas, like E O Wilson's Half Earth idea (that I support whole-heartedly) into symbolic act territory. I like the idea of some places being off-limit to humans, through taboo for instance, or simply our own will/by decree. I like imagining what might grow out of or happen in, what might choose to cross over from, such a sacred other of a place.

I also thought about otherness and space, and wondered about our messing around out there, and dreams of going further, when perhaps we still have a lot to learn here at home. I often come back to the feeling that the final frontier is still the first one right here - first and last - and that regardless of the unvisited deeps of our oceans or the unreachable edges of space - this shining dark inside us will always be where the true adventures beckon us and the mysteries never let up...

(I've also been thinking how we relate to nature, as ourselves or otherwise, in terms of the natural/cultural conceptual divide. One of the things that seems to have happened recently, is that we have begun dismantling that boundary a bit. Insofar as this is about remedying a hard split between us, a separation - alienation - it seems justified. But I wonder if the boundaries between separation and more relational forms of differencing aren't as clear as they might seem - so that in striving to undo the damage of separation we might begin to blur or erase other important distinctions. One image would be of a modern person going: "I am nature," while sat in front of their computer (and munching down a beanburger, natch,) juxtaposed with a family up a mountain in Mexico (for instance) making offerings at the edges of their land, in order to maintain what they consider a useful or necessary distinction between human and wilder worlds.)

Anyway, I eventually came around to simply acknowledging a need to sing. Perhaps for the first time I saw that desire, that yearning, to be there at the base of things for me - or at least once my apologies and rambles had exhausted themselves a bit: I just wanted to sing, just wanted to be able to open my little lungs like a birdy and make some more or less appropriate noise. So that's largely what this episode is about, or at least where it stems from.

Wrapped up with this yearning to be naturally expressive is the question and answer of "just being yourself". But the idea of singing has also taken on another note with me, concerning something like "the bringing to life of meaning" - I suppose for me this mostly concerns love. Feeling the love. And/or the meaning of life and stuff. It also concerns a kind of paradox, in that I feel such meanings are both: really there, and yet somehow latent: they need to activated, collaborated with, maintained, explored. This is what exploring Innocence and Experience has come to mean to me, and so we come to William Blake, and the second half hour (ish) of the show.

Here I contextualise things with an introduction, then sing a couple of old poems: William Blake's The Smile, and Percy Shelley's To A Skylark. Blake's poem only takes a minute or so, but Shelley's is more of a challenge - it wants me to sing higher, and for longer - and to be honest I still can't quite manage it - the energy dips around the middle and the melody settles into something more monotonous and chant-like. But I wanted to share this mostly as an insight into what has become an important part of my practise: just singing poetry, as spontaneously and naturally as you might think of speaking it, and seeing where it takes you. If I tried to give you only my best in these matters you'd likely never hear from me, but hopefully this gives at least a gist? I wrap up this section with a reading of a Skylark poem of my own, about the first time I ever heard one sing, at Sunrise Celebration 2007.

((( Thanks to "inchadney" for his field recording of a skylark! https://freesound.org/people/inchadney/sounds/74514/ )))

The second hour is mostly taken up with a group of poems under the name of Public Transport. I decided to resurrect this attempt at a long poem, or sequence, from Spring 2019, because in part it deals with my visit to Blake's Cottage in Felpham, to sing The Smile on his old front steps, and my visit to Shelley Park in Boscombe, to spontaneously sing To A Skylark, in an attempt to receive a melody to it. The poem is drawn from the writings I was able to make about those experiences at the time - initially I had (too) high hopes for the poem, and I didn't feel able to do them justice, and certainly didn't consider it finished.

However, when I went back to it, in the process of putting this show together, I felt it was worthwhile, after all. It is a long poem and does have some dense weird moments, but is mostly in a "conversational story-telling style," so shouldn't be too much hard work to listen to. Brexit was still very much in the air at the time, with the decision being delayed again. Choice, and the role of the heart in such, was a big theme for me. The interactions and interchanges between persons and systems. I was quite mad at the time, in fact, and the poem deals with this to some degree, but the ins and outs of that are part of a bigger story.

The first half hour or so of the last third of the show is a mix of wonky beats and pieces, with random spontaneous phone recordings, gradually moving into silly song territory -sorry- before trying to have some fun with the many possible reasons to sing, then giving a couple of different examples from my own processes: in the first (gold in the dustbin) a song is built up from a random melody that popped into my head one morning; in the second (earth roll) a collaborative piece of music is listened to, and words and melody worked out and performed on top.

((( This section contains some samples from and references to Diana Deutsch's Speech-to-Song Illusion: http://deutsch.ucsd.edu/psychology/pages.php?i=212 )))

The last half hour is a reading of a poem I wrote last summer, and recorded soon after. It was another of those poems I had considered a failure (plenty of them about!) but when I listened back I thought it had a nice vibe, and was somewhat fun and interesting: A weird wizard introduces us to his garden, and we go on a walk looking for three three-headed beasts who seem to be personifications of truth, goodness and beauty. But then we keep on wondering, of course. The poem is strange, silly, quite sensual. For the end of it I pick up a battered old accordion I found on Bournemouth beach some years back - it's probably not even in tune but I just use it to make a drone, to add some strange and have some fun with.

I hope you enjoy whatever you manage to catch,
Love is where the peace is,
Happy summer solstice!
Metaphorce be with yoozzze! xx